What do you do?
I make music under the poorly chosen name "Toaster". Occasionally, I DJ/make sound collages/goofery, but I'm primarily focused on producing music.

What inspires you to create and how do you keep motivated when things get tough?
Music in general is undergoing an interesting set of changes; the tools to make and release it have become incredibly democratic, and are becoming more and more so over time-- just recently I was reading about a bunch of artists creating a specific kind of music ('drag'), and with a few minutes of searching, I was downloading a bunch of releases-- all legitimately, some paid, some free, directly from the artists themselves. I can't think of a cooler thing. The ability to do this all without needing record labels, etc., or that record labels can form around an aesthetic, not a need to make money is a great source of motivation.

When things get tough-- if I'm not inspired or whatever, I usually just take a break; making music is a compulsion, of sorts, and if I step away from it a bit I'll just sort of find myself back at it. I'm usually quite prolific; but not all of it's good. Reminding myself that good stuff can come out of bad stuff keeps me going.

What do you think is more important content/finished product or technique/process?
The finished product. With music, process can be very interesting. but you typically have to explain it to people in order for them to 'hear' it. I'm happy to discuss process with people, but it's not always possible to do so, which makes the product more important by default.

Who are some people who influence and/or inspire you?
John Cage, the dudes in Autechre, Scanner (Robin Rimbaud), the people who make up Throbbing Gristle, Pink Floyd, a small stable of other electronic musicians I know through twitter. Cage and Autechre taught me to think about music in vastly different ways; Pink Floyd was the source of my interest in things avant-garde, and their production 'tricks' taught me to really *study* tracks-- they are the ultimate source of my music obsession. Throbbing Gristle taught me that even the most resolutely uncommercial thing can find an audience, if it's good enough. (Not that what I do is resolutely uncommercial, it's just inspiring to see that occur).

If you could be any fictional character who would you be?
from The Phantom Tollbooth. He learned the way.

When do you get your best ideas?
I get my best ideas after a 2nd martini; I do the best executing of them after a second cup of coffee.

What materials/tools do you use most to create your work?
A variety of softsynths (too numerous to list here), Abelton Live, Maschine, a Machinedrum, an Octatrack, caffeine, gin, vermouth, olives, cats, beer, hamburgers.

Are you self taught or formally educated? How do you think that has influenced or affected your work?
Self taught. It's affected it in that it's made development a tad slower; eventually I had to hunker down and learn about things like key and whatnot, I probably would have been able to do more, faster, if I'd learned that up front.

On the other hand, being self taught means that I take the time to get to know and understand things that I might take for granted with a more formal background, and I'm always building on that-- I suppose it's true for anyone who loves what they do, formally taught or not.

What would your creative work taste like?
Well, it's not a food, but I'll say cigarettes (if they weren't bad for you, anyway). Something you take in, which adds some hard to describe, but pleasant thing to your day, and then you let go of.

When you are not creating what do you like to do?
Hang out with my wife. She's pretty cool. I also play a whole lot of video games.

How did you learn to access your creative talents and gain the confidence to put it out there for everyone to experience?
As I said above, making music is something of a compulsion for me; I'm not sure I have any sound advice as to how to access one's creative talents. If you're doing something creative, and you need to keep doing it, you've accessed your talent. As for the confidence to put it out, I'll tell a story:

I used to belong to a mailing list that discussed John Cage's music. One of the people on there was a fairly famous pianist who had interpreted a lot of Cage's works. I thanked him for working on a specific CD of Cage's music. He railed about it, claiming the record company had picked the works for him, that it was all 'aural wallpaper' (why that was bad, he never did say), that real fans of Cage's work hated that CD because it de-emphasized Cage's more radical side in favor of more pleasant, new-age-y sounding things, and so on. The person who had performed the work hated everything about it, aside from the fact that he was apparently paid musician's union scale to make it.

The thing is, that CD introduced me to Cage's work, and I bought more of it, including his most experimental things; I still think of it fondly. Your perception of your own art as an artist is skewed. Do your level best, put it out there, and let people enjoy it, and don't worry if it sucks, if it's good, or it's somewhere in between. The next one is what you should be paying attention to.

What advice would you give others just beginning their creative adventures?
Do something creative (in your chosen field) every day. If you write, write. If you paint, paint. If you cook, send some over to my house, please. I'm hungry. 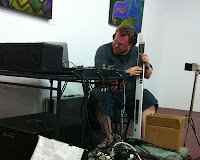 What do you do?
I am a Belly Dancer, specializing in Tribal Fusion and Cabaret Fusion styles. I am also a henna tattoo artist, painter, costume designer, and jewelry designer.

Where can we find your work?
I perform at coffee shops, restaurants, and belly dance festivals (sometimes as a solo dancer, but also with my troupe Raks al Khalil). I also do henna tattoos, at our vending booth (for MejiaArts) at local farmer's markets, art venues, and art festivals. I design and make most of my costuming and jewelry that I perform in.

What inspires you to create and how do you keep motivated when things get tough?
I'm inspired by other belly dancers, as well as Flamenco dancers and Bollywood dancers. I sometimes have a difficult time staying motivated to be creative (especially during the months of January and February), but I'm usually able to break out of it, by spending time with my husband who is in a constant state of creativity.

What do you think is more important content/finished product or technique/process?
As a dancer, I would say the finished product because I get that rush of energy from performing live and seeing people enjoying my performances. But as a costumer/henna tattoo artist, I would have to say the overall process of creating.

Who are some people who influence and/or inspire you?
My husband inspires me to keep going even during my darkest hours. I'm also inspired by the ladies in my belly dance troupe Raks al Khalil, and my Mom, who has always encouraged my creativity.

If you could be any fictional character who would you be?
Maya, the courtesan/dancer from the Mira Nair film " Sutra-A Tale of Love"

When do you get your best ideas?
In the morning, or when I'm really bored at work.

What materials/tools do you use most to create your work?
Fabric, sewing and beading needles, coins, chain swags, fine silk veils, a bellydance sword, and my body.

Are you self taught or formally educated? How do you think that has influenced or affected your work?
My first dance teacher was my Mother (who was a belly dancer in the 1970s). I have taken several classes in many styles of dance throughout my life, including Ballet, Jazz, Modern, Bellydance, Flamenco, and East Indian Odissi. For the past 6 years I've been a member of the San Jose-based belly dance troupe Raks al Khalil. I learned how to do henna from a friend of mine, a couple of years ago. She was from , and taught me about the traditional mehndi designs. I took many classes in costume and jewelry design while I was in college.

What would your creative work taste like?
Really good homemade hummus and pita bread, followed by Greek honey yogurt.

When you are not creating what do you like to do?
I love to read books and watch movies, spend time with my wonderful husband, play with our feisty little bunny rabbit Lucky, and travel.

How did you learn to access your creative talents and gain the confidence to put it out there for everyone to experience?
I used to be very timid and apprehensive about my creativity (mostly because my Dad and his family were not encouraging my creative aspects-they wanted me to be an investment banker....blech). Once I got into college and was surrounded by other talented writers/artists/musicians/dancers/etc., I was able to overcome my shyness and my apprehensions, and just put everything out there.

What advice would you give others just beginning their creative adventures?
Do what you love to do, and don't let anyone tell you that you can't do it. 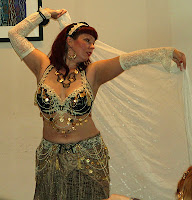